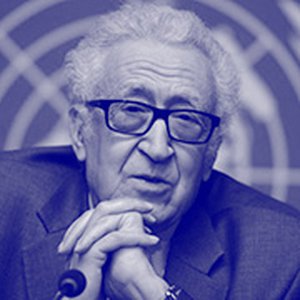 Former Algerian Foreign Minister and Ambassador, Lakhdar Brahimi retired from national service in 1993 and started a new career as an international diplomat working mainly for the United Nations until the end of 2005.

He recently spent two years (2006-2008) at the Institute for Advanced Study, in Princeton, NJ, USA.  He is also W.D. White Professor-at-large at Cornell University.  He is presently (2009) a Visiting Fellow at the London School of Economics.  He is a member of “The Elders”, a small group of Elder Statesmen and Public Figures created in 2007 at the initiative of President Nelson Mandela and Chaired by Archbishop Desmond Tutu.

Ambassador Brahimi has done extensive work in the field of conflict resolution, peace-making, peace-keeping and worked more generally on peace and security issues.  In 1988/1990, he mediated the end of the 17 year civil war in Lebanon on behalf of a High level Committee of the Leaguer of Arab States comprised of the President of Algeria, and the Kings of Saudi Arabia and Morocco and brokered the “Taef Agreement” which is still a key document in the political and constitutional debate in Lebanon.

During his time as Under Secretary General of the United Nations (1993/2005) he led some high profile missions. In 1993/94 he was the head of the United Nations Observer Mission to South Africa (UNOMSA) which observed the historic election that ended apartheid and heralded the birth a the new, non racial, democratic Republic of South Africa with Nelson Mandela as its first President. From September 1994 to February 1996, Brahimi was the Special Representative of the UN Secretary General for Haiti.

He moved on to Afghanistan as Special Envoy of the Secretary General in 1997.  He resigned from that position in September 1999 to protest against the lack of support UN efforts to end that country’s complex conflicts were receiving from the Security Council and regional governments. After 9/11 he was asked to resume his efforts in Afghanistan:  He organized and chaired the Bonn Conference and moved on to Kabul to head the new United Nations Assistant Mission to Afghanistan (UNAMA).

In between his Afghanistan assignments, he served as Under Secretary-General for Special Assignments in Support of the Secretary-General’s Preventive and Peacemaking Efforts.  He chaired an independent panel established by Secretary-General Annan to review United Nations Peace Operations.  The report was endorsed by the “Millennium Summit” held in September 2000 and became known as the “Brahimi Report”.  It assessed the shortcomings of the existing system of peacekeeping and made specific recommendations for change, focusing on politics, strategy and operational as well as organizational areas of need.

In January 2004, he left Kabul and was appointed Special Adviser to the Secretary-General. From February to June 2004, he was sent to Baghdad to help form a new Government for Iraq, which was supposed to herald the return of national sovereignty after the invasion and occupation of that unhappy country by the United States and a number of its allies.

When Brahimi relinquished his position at the UN in December 2005, Secretary-General Kofi Annan made the following statement: “The Secretary-General has accepted, with great regret, the decision of his Special Adviser, Mr. Lakhdar Brahimi, to retire at the end of this year after long and highly valuable service to the United Nations.  The Secretary-General extends his deep and abiding gratitude to Mr. Brahimi for his courage, counsel, wisdom and dedication, and hopes to be able to continue to call on his advice.  He wishes Mr. Brahimi an enjoyable and well-earned rest after a series of profoundly challenging assignments, during which he indisputably helped build better lives for millions of people in some of the most troubled regions of the world”.

Mr. Brahimi was educated in Algeria and France, and is fluent in Arabic, English and French.  He has basic knowledge of Indonesian.

Brahimi was born in 1934.  He is married with three children and six grand children.

August 23, 2011 - Palestinian leaders must put their national cause first - Lakhdar Brahimi - The Elders